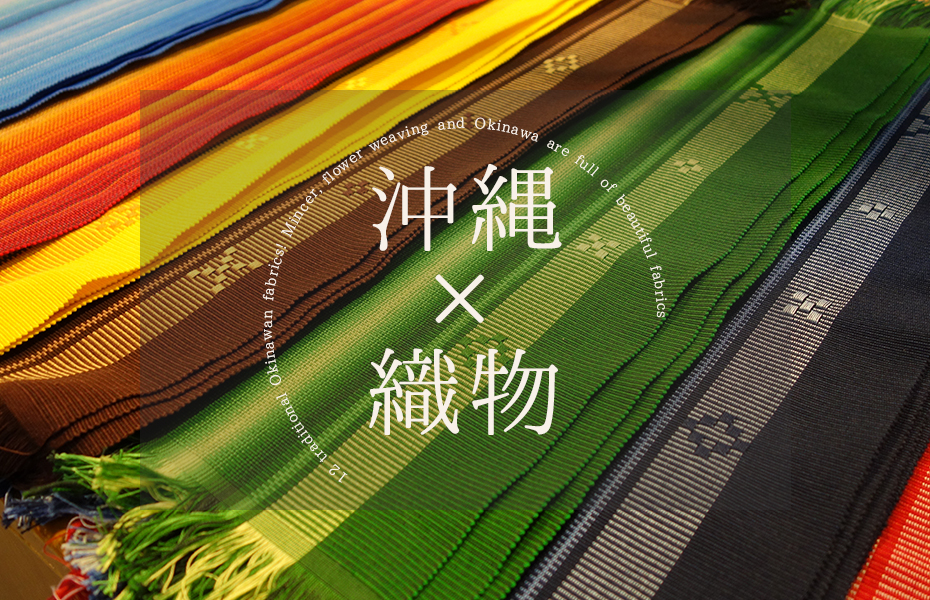 Okinawa textile is developed by tropical nature and thoughts of people.
Elegant Hanaori was for costumes of loyal family or civil servants.
Cool textile was for summer clothes.
Various Okinawa fabrics have been popular gifts, souvenirs, and at workshop.

Do you know how many textiles are in Okinawa?
Okinawa prefecture has 15 traditional crafts. Among them, 12 crafts are textiles! Each producing area has different skills and features. Okinawa textiles have developed as trading items with other countries or offering for Ryukyu kingdom.
Here, let us introduce Okinawa textiles.

Okinawa fabrics are still used for kimono or obi today.
If you would like to feel unique texture of traditional textile, we recommend kimono for you. In addition, there are various items which are easier to be used for us now.

Bags, ties, stoles, pouches, or place mats are produced with Okinawa fabric today. They are popular souvenir of Okinawa as well. In addition, many workshops of handmade coaster or porches are held. It would be great memory of Okinawa.

Dyed goods, textile, and more! Okinawa is mecca of fabrics.
Please feel breath of handed down skills and life of people from Okinawa textile.

END_OF_DOCUMENT_TOKEN_TO_BE_REPLACED

“Okinawa Bingata fabric” is traditional dyed crafts in Okinawa. Brilliant and colorful Ryukyu Bingata was once loved as kimono for loyal family or samurai family. Also, it was important trading goods. Here, we introduce its history and production process.

When you visit Okinawa, please do not miss Okinawa jewelry. Do you know traditional Okinawa goldwork? Here, we introduce beautiful goldwork filled with gorgeous history of Ryukyu kingdom.