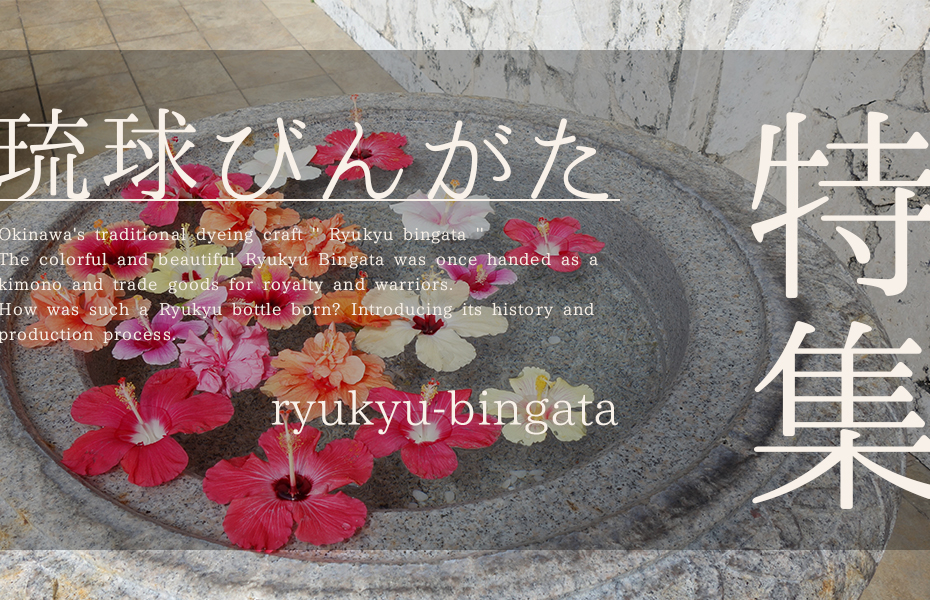 “Ryukyu Bingata” is a traditional dyed fabric in Okinawa.
Brilliant and beautiful Bingata was once kimono for loyal families or samurai. Also, it was treasured as trading goods.
How Okinawa Bingata was born? Here, we introduce its history and producing process.

“What is “Okinawa Bingata”?

How is “Okinawa Bingata” made?

Many processes are needed to make an Okinawa Bingata.
Ryukyu Bingata is made by several divisions of labor. Skilled craftsmen do each process. Beautiful colors and patterns are produced by careful handwork of craftsmen.

All processes of Okinawa Bingata

In 17th century, most of pattern paper was burnt away by invasion of Satsuma (now Kagoshima prefecture.) However, it is not declined. People established style of Okinawa Bingata today by 18th century.

But in late 19th century, Okinawa Bingata fabric became decline by the end of Ryukyu Kingdom. Furthermore, WWⅡdestroyed most of pattern paper and tools for Bingata.

We can see prosperity and interchange with various countries of Ryukyu Kingdom from Okinawa bingata fabric.
Invasion of Satsuma, end of Ryukyu kingdom, and WWⅡ. Ryukyu Bingata faced to danger of disappearance several times in its history. Nevertheless, people who love Okinawa Bingata have handed down its skill today.

Our staff who love art see Bingata and says “well, this resembles artworks of Keisuke Serizawa.” Hmm, that is interesting, and she is right. In fact, Okinawa Bingata fabric influenced Keisuke Serizawa!

Keisuke Serizawa is dyeing artist who led Mingei (National Art) Movement. He met Ryukyu Bingata when his 30s.
He talked about that moment as “that pattern, that color, that material. I felt like it is a dream that no other dyed goods are more beautiful or happier than this.”

Okinawa Bingata fabric has been popular souvenir of Okinawa. Also, workshop of dyeing is good. When you visit Okinawa, how about taking a factory tour?

END_OF_DOCUMENT_TOKEN_TO_BE_REPLACED

Okinawa textile have been nurtured by tropical nature and thoughts of Okinawan people. Elegant “Hanaori” was for loyal family or bureaucrats. Cool textile was used for summer clothes. Beautiful Okinawa fabrics are popular souvenir and gifts. Workshops are popular as well.

When you visit Okinawa, please do not miss Okinawa jewelry. Do you know traditional Okinawa goldwork? Here, we introduce beautiful goldwork filled with gorgeous history of Ryukyu kingdom.