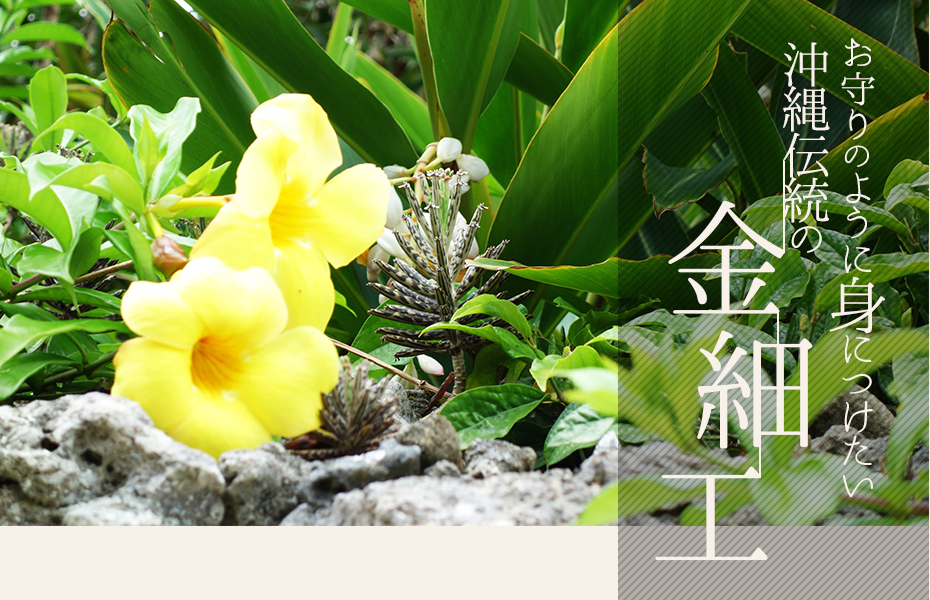 When you visit Okinawa, do not miss unique jewelry of Okinawa.
Do you know traditional goldwork in Okinawa?
Here, we introduce beautiful goldwork jewelry
which make us feel gorgeous Ryukyu Kingdom.

What is goldwork in Okinawa?

In Okinawa, goldwork is called “Kuganizeku” or “Kanzeku.”
It is a traditional Okinawa jewelry from Ryukyu Kingdom era. Craftsmen pound pure silver and produce beautiful Okinawa Jewelry. Now, it is loved by people in and out of Okinawa.

Miracle crafts from 500 years ago

Goldwork of Okinawa started about 500 years ago.
In 1509, craftsmen under government orders visited China and learned skills of goldwork. Craftsmen were accorded a rank of “筑登之親雲上 (Chiku Dun Pechin)” as purveyor to the Ryukyu Kingdom.
Many goldwork craftsmen built their studios near Shureimon. In Okinawa, “Kuganizeku” means all metals. So, they produced various metal works except for irons.

Goldwork and Okinawa jewelry has long history. However, due to end of Ryukyu Kingdom and WWⅡ, many tools and skills of goldwork were lost.
Nevertheless, a few goldwork craftsmen continued inquiring and finally revived Okinawa goldwork jewelry. Now, a few craftsmen keep traditional skill and tools.

What kind of goldworks are there?

Revived skills and tools of goldwork was handed over to the 7th Kenjiro Matayoshi, and the next craftsman.

Traditional Okinawa goldwork jewelries are popular gifts for one’s important person. Fusa ring was once a gift from parent to their daughter. Now, many men get Fusa ring as engage ring. Also, it is a beautiful birthday gift.

Auspicious goldwork jewelry can tell your wish for happiness of your dearest person. How about finding a special Okinawa jewelry for souvenir or gifts?

END_OF_DOCUMENT_TOKEN_TO_BE_REPLACED

Okinawa textile have been nurtured by tropical nature and thoughts of Okinawan people. Elegant “Hanaori” was for loyal family or bureaucrats. Cool textile was used for summer clothes. Beautiful Okinawa fabrics are popular souvenir and gifts. Workshops are popular as well.

“Okinawa Bingata fabric” is traditional dyed crafts in Okinawa. Brilliant and colorful Ryukyu Bingata was once loved as kimono for loyal family or samurai family. Also, it was important trading goods. Here, we introduce its history and production process.