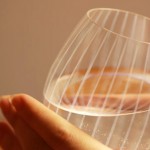 Now, we can see many TV programs that introduce traditional crafts or Japanese masterpieces.

In fact, many traditional crafts in our store are introduced in some TV programs.

Our staff often tells me "I saw this product introduced at a TV program last night."

I try to find a back number whenever they tell me.

These programs introduce the histories of ateliers or studios we did not know.

So, I enjoy learning from the programs.

Today, we would like to introduce "Taisho Roman glass series" from Hirota Glass.

It is said that all the craftsmen in that era developed their technique simultaneousliy with the inflow of modern skill of glassware from the West.

At that time, craftsmen produce glassware with Japanese traditional patterns such as Seigaiha or Tokusa.

Japanese people are good at arranging new technology from the world into "Japanese" design.

We can feel the rich ideas and senses of our ancestors from here.

"Taisho Roman Glass" from Hirota Glass is the revival series of that glasses.

The hazy patterns are expressed by a special skill “Nyuuhaku-glass-aburidashi.”

“Nyuuhaku-glass-aburidashi” is the specific name of the blowing skill.

When the hot glass touches to the mold, the sudden change of temperature develops the color of opal. Then, certain pattern will appear to the glass.

To develop the opal pattern to the glass, set melt glass in an uneven mold, and blow it.

Then, the glass becomes uneven, and temperature difference developed.

Reheating the glass, and the hollowed place raises its temperature suddenly.

This  “Nyuuhaku-glass-aburidashi” skill was introduced from the West.

In the European style, the glassware by this skill has uneven surface.

On the contrary, the "Taisho Roman glass" of Hirota Glass has smooth surface.

This is due to an additional procedure.

The craftsmen of Hirota Glass blow the glass again in reheated mold.

So, we can see hazy pattern on the smooth surface glass.

"This is Japanese color, the sense of Japan that develops calm color in Taisho era. The way of express not clearly. It arouses our imagination."

"Every day, every time, from morning to night, we receive various forms from the nature. Japanese people develops design from those. We take in the nature into the life, and enjoy the life. Then, Japanese take the nature into glassware, too. "

The glassware produced at that era include the fresh sense and rich idea of Japanese people in that era.

END_OF_DOCUMENT_TOKEN_TO_BE_REPLACED

Japanese tea kettles worth for cherishing