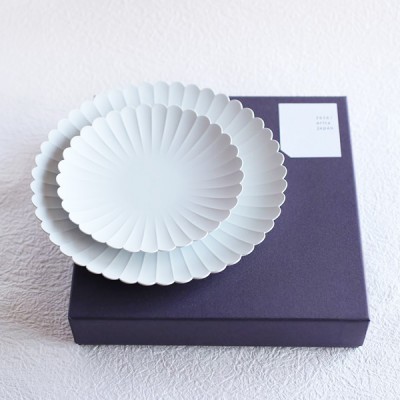 Today, we will answer a question.

Some customers asked us this question.

To tell the truth, the same question came upon in my mind about 2 years ago when I (the owner of Japan Design Store) saw the logo of 1616/arita japan at the first time. .

First, how do you read this brand's name? If you cannot read the name, you cannot tell the brand to other people.

The number "1616" is the birth year of Arita porcelain. However, if we read the number as year, Japanese people call it "Sen-roppyaku-ju-roku."

As the name of brand, the founder of this brand named "1616" as "Ichi-roku-ichi-roku." It is more rhythmical than "Sen-roppyaku-ju-roku."

Arita in Saga prefecture is said that the birthplace of Japanese porcelain.

Li San Pei, a potter of Korea invented the Arita porcelain. He was brought to Japan when troops of Toyotomi Hideyoshi dispatched to Korea.

Li was brought to Saga. He produced pottery at first. However, he traveled to find good pottery stone. Finally, he found a good quality and amount of white pottery wtone in Izumiyama, the east side of Arita. with those good pottery stone, Li produced white porcelain at Arita.

Now, Li is called "Touso", or the pioneer of  porcelain. He got Japanese name "Kanagae Sanbe" and deified at Sueyama shrine.

The skill of Li have been inherited today. Now the 14th  Kanagae Sanbe produce porcelain.

"1616/arita japan" is the name of new Arita porcelain brand. Momota Touen, a general trading company of Arita porcelain produce this brand with 3 potteries. The brand established in 2012 for starting new shop in a high-class hotel "Palace Hotel Tokyo."

Mr. Momota, the representative of Momota Touen decided to establish new brand to produce new Arita porcelain and spread it to the world.

Then, they pursued the origin of Arita porcelain "simple white porcelain" just like Li San Pei produced 400 years ago. That produced the simple and modern tableware TY Standard series.

The brand "1616/arita japan" named by the suggestion of Mr. Momota, "Numbers are common in the world" and the proposal of Mr. Yanagihara, "emphasize 'Japan' and 'Arita' to the world."

Next year will be the 400 years anniversary of Arita porcelain. In Arita, 10 potteries and 16 designers are carring on the project "2016/Project."

In the project, the invention of new tableware with Arita porcelain history and modern life style.

We cannot wait the release  of  new products next year!

1616/arita japan produces beautiful Japanese porcelain with deep knowledge of history and culture. The number "1616" express the spirit of this brand.

END_OF_DOCUMENT_TOKEN_TO_BE_REPLACED

Bud vases for your favorite place

Enjoy richer life with flowers in easy way! A stylish bud vase can make sophisticated atmosphere with a single of flower. Beautiful vases would be great gifts for your important person.

Japanese tea kettles worth for cherishing