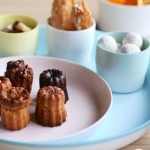 The S&B "Colour Porcelain" series from 1616/arita japan was introduced on the TV program "Made in Japan found in the world" of "Wafu Souhonke."

Today, let us introduce the charm of 1616/arita japan.

An ancient city Delft in Holland is the birth place of Vermeer, a famous Dutch painter. Also, Delft is famous for Delft pottery or Delft porcelain.

Delft ware was established about 500 years ago. About 1650's, the East India Company started to import porcelain from Japan or China. The good quality and detailed painting of those porcelain made great influence on the craftsmen in Delft. Therefore, a lot of skill of Arita ware was introduced to Delft ware.

The TV program introduced a select shop in Holland called "the frozen fountain."

S&B series are the collaboration with Arita porcelain and Dutch designers Scholten and Baijings.

With dozens of try and error, the craftsmen finally produced S&B series of 1616/arita japan.

1.8mm thinness porcelain is a see-through tableware. You can see your finger slightly.

You may worry that thin porcelain is fragile like a glass.

The S&B mug of 1616/arita gain its popularity for its cute color and the lightness as well as toughness.

In addition to coffee cups and mugs, S&B series have sugar and creamer sets.

At the TV program, a woman in Amsterdam in Holland was introduced.

She use flower vase and teapot of 1616/arita japan. Japanese porcelain fit the interior of a house in Holland.

When she has guests, she make some tea with her favorite Arita porcelain.

We are proud that Japanese masterpiece are used and loved by people worldwide.

On the top picture

Second picture (with some pairs of coffee cup and saucer)

END_OF_DOCUMENT_TOKEN_TO_BE_REPLACED

We found a table coordination fit with sushi. How about enjoying stylish sushi party with Suzugami and Taisho Roman glass?

Kinpaku, or gold leaf is the symbol of eternity and long life. The Japanese traditional crafts with kinpaku provide elegant and luxury atmosphere. Shiny gold tableware would be great gifts as well.

Our staff who see modern traditional crafts every day tell their recommended bourbon glasses. If you look for stylish whiskey glasses, leave it to Japan Design Store!