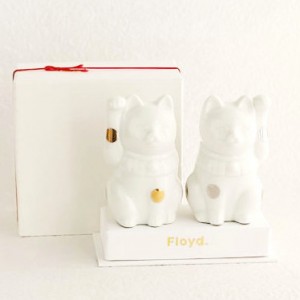 Have you ever seen "Maneki Neko"?

You may have seen it at the register counter or in front of some Asian shops or restaurants.

Maneki Neko is believed to bring customers or good luck on  business.

The Maneki Neko with left paw raised may bring the customers.

And the fortune cat with right paw raised may ring the money.

In Japan, we often send it as a gift for celebration for the opening of business.

Do you know the origin of Maneki Neko?

Today, we would like you to introduce the history and meaning of lucky cat.

3 theories of the origin of Maneki Neko

In fact, there are many theories about the origin of lucky cat. I would like to introduce 3 convincing theories.

In Edo era, (about 400 years ago) a samurai Naotaka Ii passed by a temple Gotokuji. In front of a temple, a cat beckoned him. Therefore, Ii decided to drop into a temple. After a little while, it turned to a thunderstorm. He was able to avoid a heavy thunderstorm because the cat beckoned him into the temple.

Ii appreciated the cat and the temple, and he donated a lot amount of money to rebuild old temple.

After the cat passed away, the chief priest of Gotokuji temple built a tomb for the cat. Later, the tomb became "shoubyou-do," a place for deifying the cat. And "Manegi Neko" (not Maneki Neko in this temple) were started to be made.

About 600 years ago, a samurai Doukan Oota was inferior position at the Battle of Egota Numabukurohara. When, he got lost after he lost some battles, a cat beckoned him and invited him into Jishouin temple. Oota was able to escape from enemies. After he had rest at the temple, he rallied from an inferior position, and finally he won the battle.

He appreciated the cat and temple, and he dedicated a Neko-Jizou, a statue of the cat to the temple. Later, fortune cat was started to be made.

About 200 years ago, an old woman had to part with her favorite cat due to the poverty. One night, she dreamed about her cat. In her dream, the cat said "make a doll of me, or you can get luck." Therefore, she decided to make a doll made of Imado pottery.

She sold the dolls in front of the torii, a gateway of Asakusa shrine. Her dolls became a big hit soon. That was the origin of lucky cat.

Now, you have some ideas about lucky cat, don't you?

By the way, the colors of Maneki Neko also have meanings.

We have very small cute lucky cat from Floyd.

We wish the lucky cats bring you good luck!

END_OF_DOCUMENT_TOKEN_TO_BE_REPLACED

How to brew delicious coffee at home!

Make a cup of perfect coffee with Japanese coffee accessories