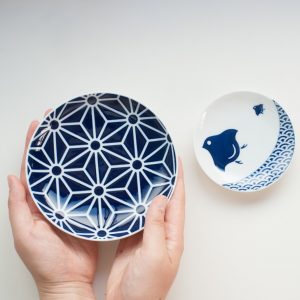 Do you know Mamezara and Kozara?

In our store, we introduce various kinds of mamezara (tiny plates) and kozara (small plates).

Then, what is the difference of them?

How tiny or small it should be?

In fact, I can't clearly tell the difference of mamezara and kozara.

So, now is the time to solve my question!

Today, I would like to introduce the difference of Mamezara and Kozara.

Estimate of sizes of mamezara and kozara

I researched the answers for my question.

Then, I found that there is an estimate sizes of Mamezara and Kozara.

Shakkan-ho is Japanese unit of length, such as Shaku, Sun, or Bu.

In the world of Japanese tableware, the name of plate is decided by the diameter.

There are all various of opinions in the sizes, but the estimate sizes are as follows.

Therefore, among plates, Kozara is within 15cm.

Among Kozara, Mamezara is the name for plate less than 10cm in diameter.

In fact, the name "Mamezara" is new. Before that, the tiny plates were called "Teshio-zara".

Teshio-zara is placed by the chopsticks to "purify the dinner."

As time has past, that Teshio-zara became Mamezara to put soy sauce or any small dishes.

I didn't know such a history and estimate size of the mamezara.

Then, let's compare the mamezara and kozara in the items of our store!

Among them, 2 brands "Azmaya" and "KIHARA" have both Mamezara and Kozara in a series.

First, Azmaya is a popular brand in our store.

Here is the Kozara of Azmaya.

Inban-kozara of azmaya has been popular for its useful size and fresh patterns.

Inban-kozara is 11.7cm in diameter. As for a Kozara, we can say that it is small.

Craftsmen print the pattern one by one. Therefore, all the plates have different blurs of patterns.

The patterns are Japanese traditional and auspicious patterns.

So, good items for gifts, too.

And this is the mamezara of same series.

Inban-mamezara have the shape of auspicious motifs.

The sizes are differs from the plate to plate. In average, it is 8.7cm.

Not too small, nor too large. It is very useful.

In addition to the 5 plates at the picture, Inban-mamezara has 7 types.

Moreover, 7 types have another mamezara, Dobai.

It is happy to collect all little by little!

Mamezara and Kozara of KIHARA

Next is KOMON series from KIHARA.

In KOMON series, Kozara has the name of Torizara.

The patterns are printed by a special skill "pad printing."

So, the print is very bright!

You can use the Torizara in daily dinner.

Torizara of KIHARA is 15cm in diameter.

It is a large plate as Kozara.

Next is Mamezara of KOMON series.

Maqmezara of KIHARA is 10.8 cm in diameter.

It's a big mamezara. You can put various dishes.

If we put these 4 plates in order of size, it becomes like this.

Another post, I describe the difference of mamezara & kozara of Azmaya and KIHARA in detail. Please check this, too.

Now, I am so happy to find the answer for my question.

Can you get the difference, too?

If we have more knowledge, the world of tableware become more and more interesting!

END_OF_DOCUMENT_TOKEN_TO_BE_REPLACED

Not Just a Metal Fruit Bowl! 7 Use of KAGO from Nousaku

This is a tea caddy, which was awarded the Good Design Award. It was taken up even Japanese TV program "IPPIN". Please enjoy the coordination of peaceful hospitality emotion of Japan.

This is JAPAN! Japanese Urushi lacquer for your life