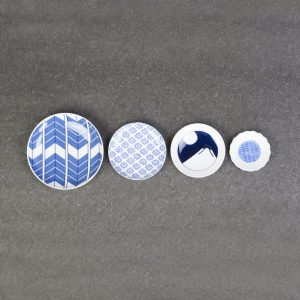 These days, mamezara or tiny plates have been popular in and out of Japan.

You can see various food presentation or table setting with mamezara plates in Instagram.

The other day, we got new items!

That is mamezara of KIHARA.

You can see various mamezara with beautiful Japanese traditional patterns.

Then, what is the difference between mamezara of KIHARA and Azmaya?

Today, let us introduce the difference of 2 mamezara.

Mamezara of KIHARA are Arita porcelain.

Arita porcelain is a Japanese traditional craft in Saga prefecture. It has more than 400 years' history.

The producing area of Hasami porcelain is next to that of Arita porcelain.

Pad printing is a printing skill using silicon pad. With this printing skill, the craftsmen can print complex and delicate patterns on plates.

Inban is one of the printing skill from paper to porcelain. Craftsman wet the patterned “tensha-gami” (printing paper), and put it on to the unglazed pottery to print pattern. Since craftsman put and print one by one, all plates have each own face.

Torizara is 15 cm in diameter.

Mamezara has various forms. On average, they are 8.7 cm in diameter.

Both 2 mamezara series are rich in variety.

Both types have 7 forms.

In addition, kozara has 5 patterns.

They have something in common, too.

The patterns or forms of both brands have auspicious meanings.

Whatever you choose, the plates may bring you happiness.

We hope you can enjoy richer life with various mamezara.

Nostalgic and modern kozara with komon

END_OF_DOCUMENT_TOKEN_TO_BE_REPLACED

This is JAPAN! Japanese Urushi lacquer for your life