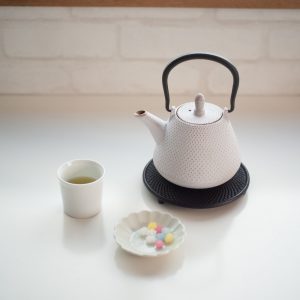 It's September. In Japan, it is still hot, but I am waiting for the comfortable season.

By the way, do you know that there are many Japanese words used in overseas?

For example, Sushi, Tempura, or Kawaii!

Among various Nambu ironware, colorful teapots have been popular.

In fact, a Nambu tekki company earns the half of its total sales by the purchase from overseas!

However, how Nambu tekki got popularity from overseas?

The secret of popularity comes from a challenge of a Japanese company.

Today, we would like to introduce a short history of Nambu tekki.

With this trivia, I hope that you will like Nambu tekki more!

A short history: Nambu tekki beyond the borders

Nambu tekki is a Japanese traditional craft of casting.

It has about 900 years' history. It is designated as the first Japanese traditional craft.

Iwachu began exporting of the products as same as Japanese products.

The turning point arrived in 1996.

Iwachu got a demand from a tea specialist store in Paris.

"Can you produce colorful teapots?"

At that time, cast iron products are black only.

Craftsmen of Iwachu felt at a loss.

Nambu tekki is characterized by its beautiful surface of casting.

"How can we color the teapot with keeping the beautiful surface of Nambu tekki?"

Craftsmen devised the way of coloring after 3 years.

Soon, the reputation spread to the United States and Asia.

The name of company "Iwachu" means the colorful teapots in some area now.

By this unique story, colorful teapots of Nambu tekki were born.

Now, some cafes in Paris serve their tea with colorful teapots of Nambu tekki.

As I am a Japanese, this is a great honor.

We regret to say but our store does not sell the products of Iwachu now.

However, we got great colorful teapots of Nambu tekki!

The teapots have 3 types.

Ironware seems to be hard to care. But these teapots are enameled inside.

So, you do not have to worry about rust.

"A person in somewhere beyond borders may use this teapot, too..."

It is pleasant tea time with the thought of a person in faraway place.

END_OF_DOCUMENT_TOKEN_TO_BE_REPLACED

Kinpaku, or gold leaf is the symbol of eternity and long life. The Japanese traditional crafts with kinpaku provide elegant and luxury atmosphere. Shiny gold tableware would be great gifts as well.

In Japan, 2 pairs of chopsticks are called Meoto-bashi. Stylish Japanese chopsticks are recommended as gifts for wedding, anniversary or celebrating long life. Please select best set from various chopsticks for your dearest person.

You can cook food with donabe, and directly serve donabe to the table. In this page, we collect our recommended donabe. Omnipotent donabe will broaden your cooking.

Japanese wind chimes are the great feature of summer in Japan. We selected the wind chimes which have elegant sound as traditional crafts, and modern design. Enjoy richer summer with cool sound of wind chimes.