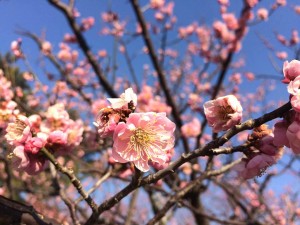 The season of Ume comes!

Ume (Japanese plum blossom) is a flower in winter to tell the coming of spring. In japan, we call  Ume as "Hana no sakigake" (the herald of spring) or "Harutsuge gusa" (the plants tell the spring.)

Ume endures the severe cold from December, and looks like telling us that "the spring is coming soon!"

The sweet-smelling of Ume and beautiful bloom of white or pink flowers, give us uplift for spiring.

The contrast of sky blue and light pink Ume is so beautiful.

Encouraging bloom in the cold air make us cheerful.

By the way, the Ume at the picture is in the park near our store.

Use tools with Ume motif from January to March

Before the bloom of Sakura (cherry blossoms), how about looking for the comming of spring with Ume motif tools?

Today, we would like to introduce the tableware and small utensils of Ume motifs.

When I see somebody use these chopstick rests in this season, I may think "he or she knows the way of enjoy Japanese season."

Change chopstick rests as the season changes. It may bring you a richer life.

This mamezara (tiny plates) have rounded form. Therefore, you can put multiple food.

The tiny plates from Azmaya, especially, Ume, Momo (peach), dandelion and sun flower have rounded form. You can easily stack them.

How do you like the collection of Ume motif tableware?

Now in Japan, we enjoy hanami (seeing beatiful bloom of flowers ) with Sakura. However, before the Heian era, people enjoyed the hanami with Ume.

It is still cold outside. With Ume tableware, enjoy the coming of spring.

END_OF_DOCUMENT_TOKEN_TO_BE_REPLACED

It is a Scandinavian design mug that utilize the skills of type craftsman of Seto City, Aichi Prefecture. If you add to coffee time you can enjoy Nordic cafe.